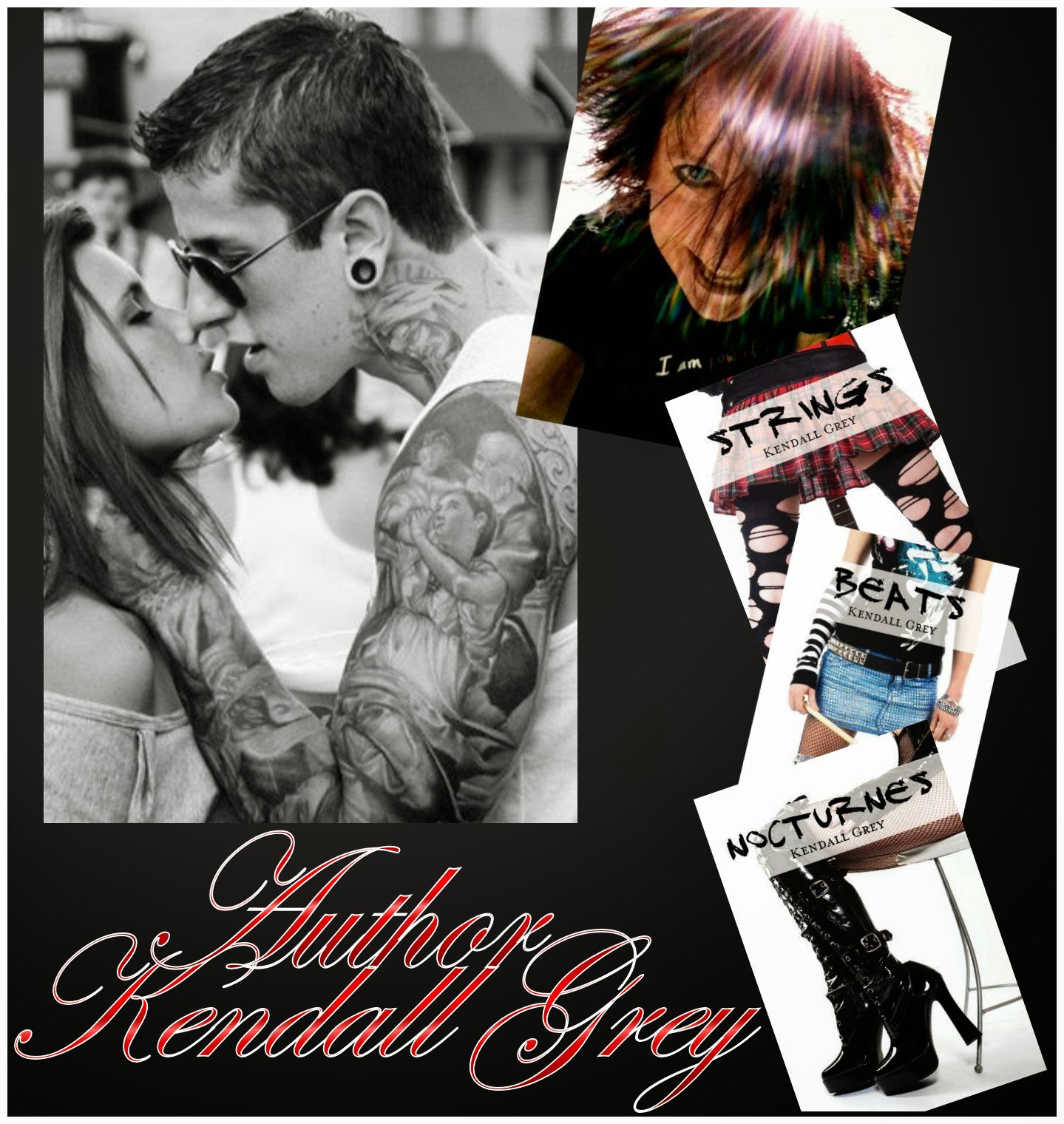 Hi kendall!
Thank you for joining  us today at the Author2Authorblogchat@blogspot.com


1, Hi, tell us a little about yourself?


Let’s play two truths, one lie. One of the following statements is a lie. Guess which one. A) I like Dachshunds and tofu, but not necessarily in the same bowl. B) I dabble in the Black Arts from time to time, but I’m always careful not to leave behind any stains. C) I’m a total prude.


2, Share with us a quote from one of your favourite characters in your books?


My favorite quote is the last line of HOT-BLOODED because it packs the baddest-ass punch I think I’ve ever thrown, but I don’t want to spoil it for anyone. Instead, I’ll call on my naughty girl Letty from STRINGS for some levity: “But by God, if I don’t get laid tonight, my cooter will go nuclear and wipe out a city block. Nobody wants that.”


3, Who was the easiest to write for out of all your awesome characters and why? Hardest and why?


Easiest was Letty. She’s basically an extension of me, so I didn’t really have to try very hard with her. :-) Rax was probably the hardest because I didn’t like him much, and I knew most readers HATED him after BEATS. So, transforming him from a raging asshole into a guy worthy of a strong but damaged woman was difficult.


4, If you had to choose, which writer would you consider a mentor?


I have a few trusted writer friends whom I confide in or trade manuscripts with, but I mostly do things by myself. Though, my editor and dear friend, Jenn Sommersby Young, has helped me out a TON. She also writes as Eliza Gordon. I loves her.


5, How do you come up with the titles of your books?


They usually just come to me. I don’t think I’ve ever had to think really hard about one. I lean toward one- or two-word titles that encompass the theme of the book or pick up on an important thread that runs through the story. I also keep the story title in mind while I draft to help me find the right imagery to convey the theme.


6, What advice would you give to others who want to make writing their career?


Find a different passion that lights up your soul. Writing will kill your spirit. It's pretty damn lonely and depressing most of the time, and I wouldn't wish this curse on my worst enemy. <—I’m totally serious.


7, How long does it take to complete a novel from concept to completion?  And how do you over come writers block?


It depends on the novel. The Hard Rock Harlots books were fairly easy to write because there isn’t a lot of backstory to work in. Books that have less depth usually move pretty quickly. The JUST BREATHE books and HOT-BLOODED took much longer. There’s a ton of stuff going on behind the scenes that I have to plan and account for. That makes drafting very tricky.


As for writer’s block, I just let it runs its course. I got stuck for two months trying to plot out HOT-BLOODED, but when I was finally ready to write, I realized I’d spent those two months thinking about the book, which is HUGELY important—maybe even more so than the actual drafting. If I don’t spend enough time thinking, the book will be a total disaster.


8, Have you ever trashed a novel or story before or after finishing it, feeling it wasn't turning out as you planned?


Yes and no. I have a couple of stories I started and never finished, but I haven’t given up on them. Like I mentioned above, I just need to spend more time letting them stew in the back of my mind. I’ve never met a story I had to totally trash, though I have ripped big chunks out of unfinished stories and recycled them into other books.


9, Can you write on demand and under pressure, or do you need time and space before the creativity starts to flow?


I don’t do well under pressure at ALL, which is odd because I used to love working under a deadline. Nowadays, I can only work for myself. As soon as I “owe” someone something, I clam up and can’t follow through. So, pressure is BAD for me. I can only start writing when an idea grabs me and won’t let go.


10, Do you ever get ideas at random moments, and if so how do you hang on to them?


YES! All the time. Usually I get great ideas in the shower or in the car. I have to mentally repeat them over and over until I can get somewhere that I can write stuff down. I also keep my phone next to my bed at night and email myself ideas all the time. Sometimes I wake up with three or four emails to myself about stories. HA!

I am pleased to welcome  two rockers from one of the

(photo's belong to there individual owners)

SHADES • You are one Hot bad ass rockstar with a cocky ass attitude. What did you think when you first saw Letty in the bar?


LETTY• You are a real bad ass rock chick what did you think of shades  when you first met him?


"The fact that he was willing to let me peg him with a strap-on certainly won me over. Aside from that, I thought, 'Orgasm. Must have one. And look. Orgasm donor ahead. Perfect.'"


SHADES&LETTY• When you to are in the same room you are like fireworks on 4th July just waiting to explode.  Is it always like that between you?


*Looking at each other* "Pretty much.” *Giggling*


LETTY•Is Shades a rock god in the bedroom as he is on the stage? All our readers would like to know.

SHADES&LETTY• How did you feel when RAX joined you behind the bus?


Shades: "Surprised at first, but it was groovy once we got into it.”


Letty: “Being used by two hot dudes like that was one of my top five sexual experiences. Totally fuckin’ awesome."


SHADES•What was going through your head when you saw Letty Rocking out on the stage for the first time?


“I hope I can get rid of this raging boner before Killer Dixon gets onstage or shit’s gonna be embarrassing."


SHADES&LETTY• When was the first time that you loved each other?


Shades: “Depends on your definition of love. I loved banging Letty in that hotel room in Athens.”


Letty: “And I loved clubbing your ass that night with my womancock. So, love at first sight, right?”


BONUS - WHAT is next for you both?

Thank you SHADES & LETTY for coming today, you both be fantastic to interview.
Posted by BLOGL.MEVANS