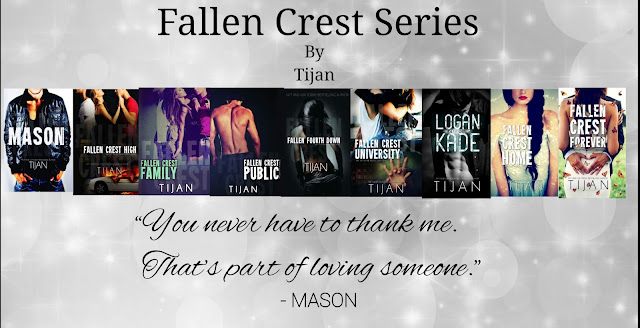 On the 8th May I started doing a daily promo with a count down of all the Fallen Crest books by Tijan, the covers, teasers and the book links. It started with the very first book Mason which was the prequel and it ended with the final book in the series Fallen Crest forever that was released yesterday. I asked Tijan if she would do a special interview about the Fallen crest series. So here it is, I hope you enjoy reading this as much as I loved chatting with Tijan. 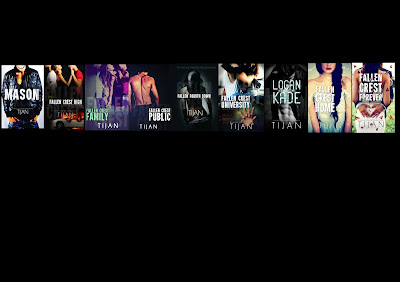 Q:How did you come up with the idea of the fallen crest series?

Tijan:No clue! I heard the song Sail by AWOLNATION and sat down and wrote the outline in three days.

Q: I know you have probably been asked this many times before but I have to ask. Who did you visualise as Mason and Logan when you started writing the fallen crest books?

Tijan:I very rarely ever visualize anyone as my set character. I want to say I never do, but there’s a couple new projects I’m working on that I have. With the Fallen Crest characters, there’s no one in my mind though. I really like to let the readers have their image and respect that. I’ve been that reader who had an image, then the author came out with their pics, and I was a little heartbroken because that’s not who I thought at all.

Q: When you first wrote book one in the series, did you know back then how many books there would be?

Tijan:No. Way! Lol! When I say I didn’t know what I was doing back then, I really didn’t. I just wrote FCH and then published it because so many people were stealing it as their own on Wattpad. I had people writing their own sequels to it, and I couldn’t handle that. I didn’t want to lose it, so I pubbed it and it’s the book that started my career. I actually wrote FCH as a standalone, but the ending was a to be determined kind of thing, then I had an agent ask me to write up a synopsis for a sequel and that really got me going with Fallen Crest Family.

Q: You have kept the readers myself included hooked and you have teased us on which brother would be the luckily guy to have Sam. I am sure readers are dying to know as am I,
did you ever think that Sam Should of been better with Logan rather than Mason?

Tijan:If I have, it wasn’t my intention at all. Sam was close to Logan and there was ‘something’ there, so I wanted to deal with it in the books. Or, I knew I had to, hence the ending of Fallen Crest Public and one of the storylines in Fallen Fourth Down. Sam and Mason have always been it, though. As a writer, you really feel the pull towards characters and it’s not something I could change even if I wanted.

Q: Throughout the series there has been some highs and lows with the Fallen crest characters. Which high and low did you find harder to write?

Tijan:There’s a ‘high’ moment in Fallen Crest Forever that had me in tears. It’s with Sam and running, and every time I read it, I start tearing up so that one for sure. There’s also another moment in FCForever where I wrote a chapter in Mason’s point of view, where he’s about to do something and it gave me chills. Actually, there’s two moments in the book from Mason’s pov that does that. Other moments: when Sam gets beaten up in the bathroom. I don’t like that Sam got hurt, but writing that gave me some adrenalin. Then the moment where Mason, Logan, and Nate had Analise drink wine. Looking back now, I can’t believe I did that; but I went with it. The guys do some serious shit.

Q:Which one Mason or Logan?

Tijan:BOTH! I love them both.

Q: What would you do if you were stuck in a room with
Logan for twenty-four hours?

Tijan:Fight with him. I’d bicker with him to get him riled up. He’d be entertaining to me then.

Q:Sam is very athletic running all the time, who do you think would win out of her and Mason in a race?

Tijan:Mason is faster, but she’d win in a long distance race.

Q: Fallen crest Forever comes out on the 16th May, all the fans of the series are sad its coming to a end. How do you feel now its an end of era with the fallen crest series? 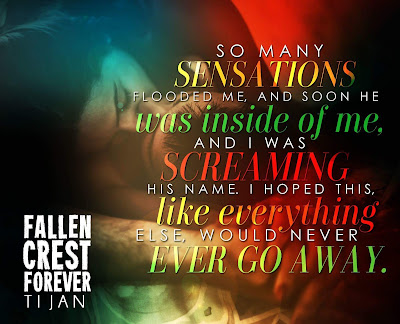 Q: What has been your favourite highlight of the entire series ?

Tijan:The last book! I put a lot into it and I hope the readers can see that, but the last book is the highlight for me.

Q: What moment sticks out to you out of all the fallen crest books and why?

Tijan:My answer would be the same as the question above about the ‘highs’ and ‘lows.’ I think I unintentionally answered it there. Lol!

Q: What can readers expect in fallen crest forever?

Tijan:You will see! I’m not teasing here, but I don’t
want to spoil anything either. 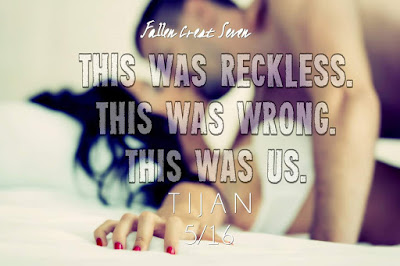 Q:What would you like to say to your readers who have stayed with you on this amazing Fallen crest journey?


**********
This has been a awesome count down to the final book in the fallen crest series I hope everyone has enjoyed this brilliant series as much as me. Remember you can always go back to the very beginning to enjoy the characters all over again.
Posted by BLOGL.MEVANS