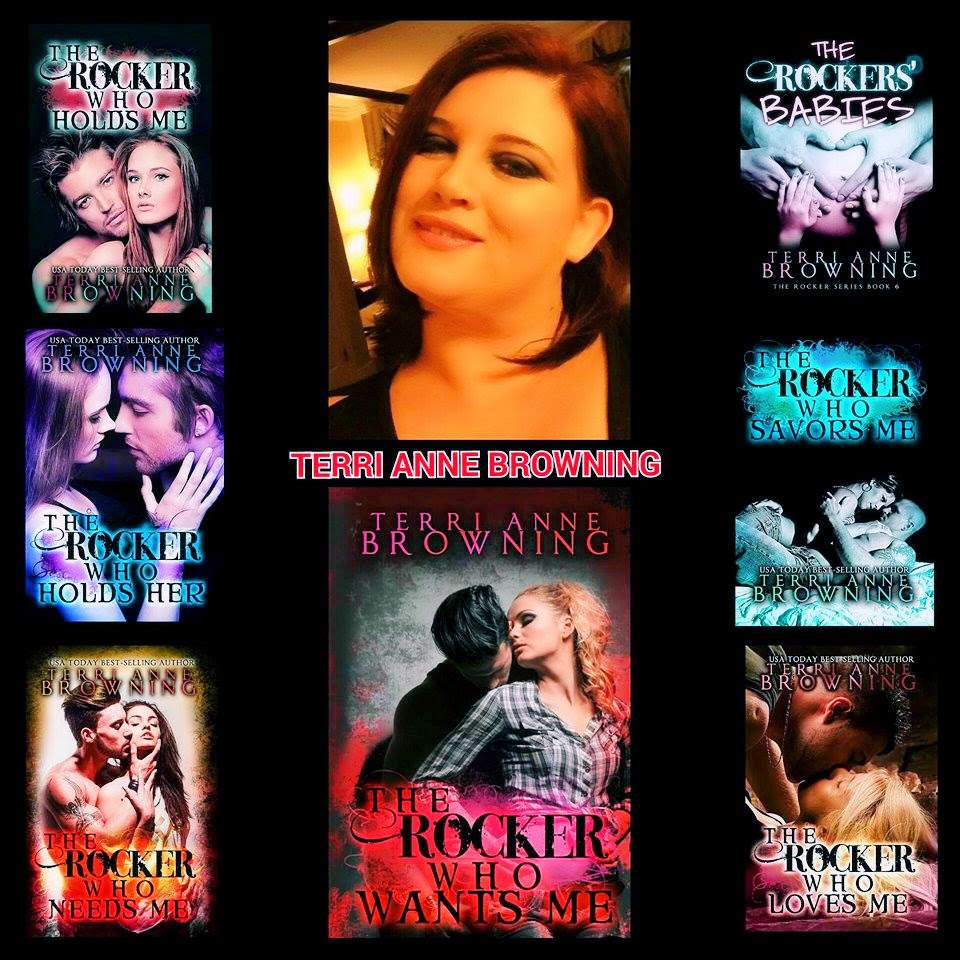 Tell us a little about yourself?

Well, I'm married to the amazing Mike Browning and we have three adorable kids together as well as our loveable Olde English Bulldog, Link. Writing is my full time gig now and Mike helps me as my PA and business manager.

Contemporary Romance. Mostly I stay in that genre, but when The Rocker... Series is over I'm going to do a spin off involving the kids and make it a New Adult. 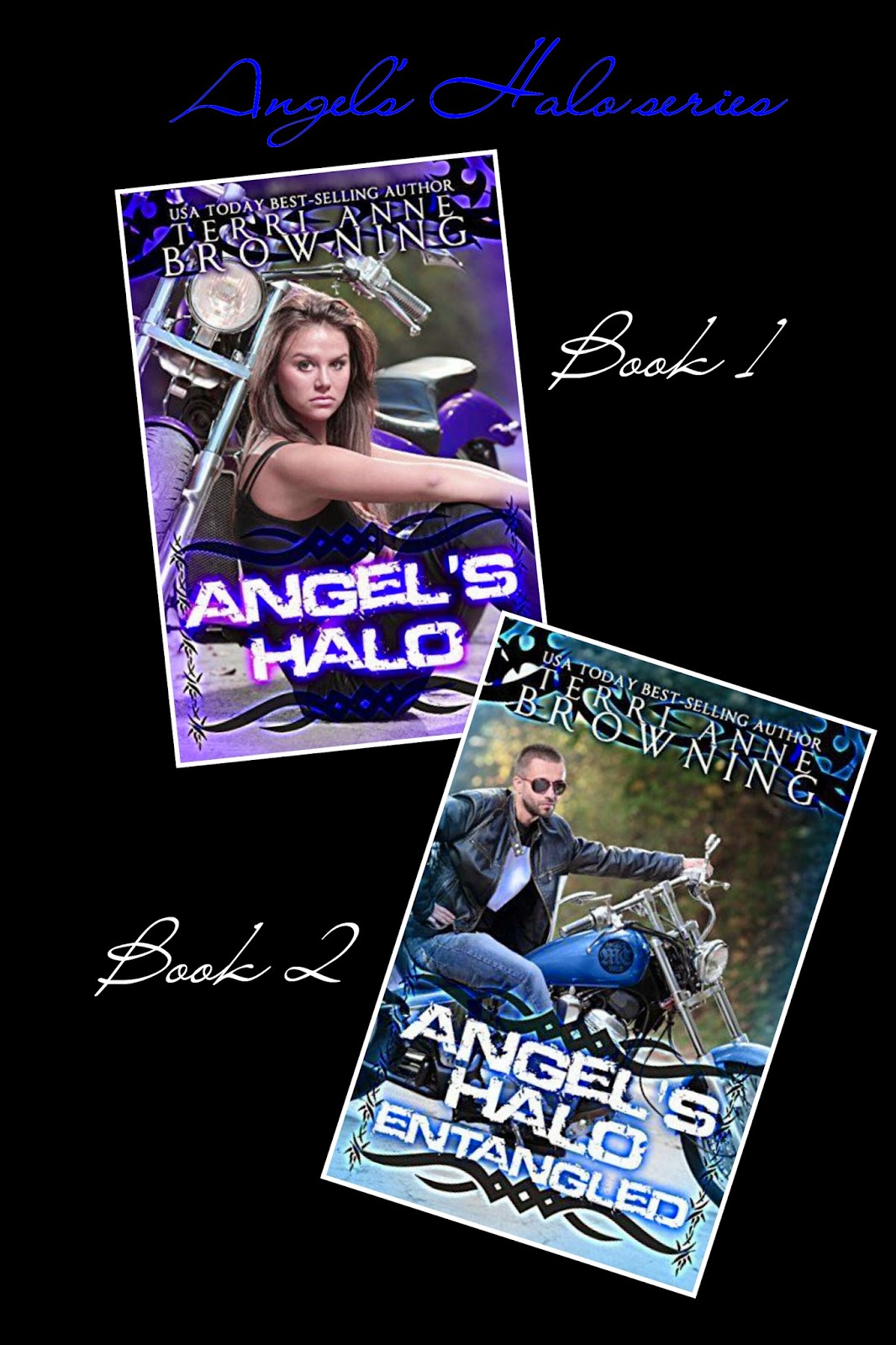 Is it hard to come up with new ideas and / or plots?

Most of the time it isn't hard at all. While I'm writing one book the plot for the next, or even the next two to three books kind of fall into place and I can easily see what I need to so that I can move forward with the entire series.

What inspired you to write your book?

When I was sixteen I couldn't find a book that would hold my attention for longer than a few hours. Sometimes I would just quit reading in the middle of the book or skip through it because it just wasn't interesting enough. So I decided to write my own, and then I could control every aspect about the book and not be disappointed.

Who is the easiest character to write for and why? Hardest and why?

The easiest character to write was and is Emmie. She's become a part of me over the last seven books and I feel like I can write her in my sleep. Shane was and is the hardest to write. He is incredibly stubborn and there were times I just wanted to chuck the entire book because he wasn't going to do what I wanted. So with The Rocker Who Loves Me I had to grit my teeth and let him lead the way. It was incredibly frustrating.

Do you have a specific writing style?

I do my best writing in first person. It lets me get inside the characters better, whereas third person doesn't allow that opportunity

How much of the book is realistic? Are experiences based on someone you know, or events in your own life?

Thankfully, the experiences that Emmie or Drake or even Harper have had are not things that I've had to experience first-hand. But I've known people that have had these real life experiences and have used that to guide my characters' reactions to give the books extra realistic edges.

What book are you reading now?

I've got a stack of books on my bedside table at the moment. Beck by Harper Sloan is waiting for me next. I'm behind in all my reading and I seriously need to catch up on a lot of my TBR list.

What are your current projects? If you had to do it all over again, would you change anything in your books?

I'm about to start another The Rocker... Series book. The Rocker Who Cherishes Me. Sometimes I wonder if about what changes I would make if I had to do it all over again. If I did, I might have put Emmie and Jesse together... But then I get all kinds of sick thinking about Nik and Layla and I can't even finish the thought.

Can you share a little of your current work with us?

Well, I can tell you that The Prologue for The Rocker Who Cherishes Me will be tissue worthy, and that it is going to be a rollercoaster of emotions.

Is there anything you find particularly challenging in your writing?

I tend to keep my books shorter than the normal novel. So that busy women/men can read in one setting if they chose to do so. So it’s sometimes hard to cut down all the things I want to put into the book. But mostly I've found that writing isn't a challenge at all.

Who is your favourite author and what is it that really strikes you about their work?

I have a list a mile long on my favorite authors and to pick just one would be like asking me to choose a favorite child. LOL. But the majority of my favorite authors all write fierce female characters who catch my attention from the very first chapter and keep me begging for more.

Who designed the covers?

What was the hardest part of writing your book?

Did you learn anything from writing your book and what was it?

I've learned that there are some serious dark places within myself, as well as some softer brighter places that I didn't know about. So writing has helped me grow as a person as well as an author.

Do you have any advice for other writers?

I love hearing advice from other authors, as long as it is advice. I actually have one as a Beta reader so that I can get an opinion from that aspect. (Waves and blows a kiss to Mellie George)

Do you have anything specific that you want to say to your readers?

I want to tell them all how much I love and appreciate their love and support. Their continued interest in my Rockers still amazes me and I would be nothing, absolutely nothing, without them.

How long have you been writing for?

Rock of Ages and Pitch Perfect

How difficult is it to come up with one of your amazing plots?

Plots aren't normally difficult for me. Half way through one book my characters have already screamed at me where they plan on going, so they make my work so much easier.

How about characters?  Are they easily born and developed?

Some are more difficult than others that is for sure. But normally during one book I've already introduced the next plot and any other secondary characters that will lead to the plot of the next lead characters' book. I'm strange like that. lol.

How long does it take you to complete a novel from concept to completion?

Normally, three months. Four tops. If I don't run into blocks or have family issues arise.

What was your first published piece? And how was it to publish your first book?

The first book I published was Reese: A Safe Haven Novella. It was thrilling and scary as hell. Also kind of a let-down because I was expecting the book to get popular overnight and be a huge success without even trying. LOL. So after I wrote The Rocker Who Holds Me, I was going to give it all up and go back to finish my nursing degree. Weeks before I was due to start school again the book took off and I was getting demands for more. And more. And more. So the first was sadly a let-down, but the second and everyone afterwards was a real high.

As a teenager I trashed work left and right. I don't think I actually finished a book until a few years ago, but at the time I didn't know about self-publishing and those works were lost along the way. Now, I always try to finish a book, even if I don't think it has potential.

Out of all your brilliant characters which ones were you favourite?

Emmie is my favorite female, and Jesse would have to be my favorite male. Most already know this, but I gave Jesse my husband's personality, so he holds a huge part of my heart.

I have an office that I use for writing, but sometimes I do it from my front porch first thing in the morning. It is one of my favorite places.

Which one of your awesome books would you like to see be made in to a movie?

None. I'd rather they were all made into an HBO series. With no name actors and killer music.

What was the worse job you ever done?

When I was 19 I was the assistant manager of a Hardees. Out of all the jobs I've ever had, that was the worse for me.

Do you ever get any ideas at random moments, and if so how do you hand on to them?

All the time. I normally keep a notebook with me or if that isn't available I email myself with my iPhone.

Can you write on demand and under pressure, or do you need time and space before the creativity starts to flow and how do you overcome writers block?

I can write scenes on demand, but if you wanted a full book? No way. I'd need a while for the idea to cook before I even sat down to write it.

THANK YOU TERRI FOR A GREAT INTERVIEW

FOR ALL OF TERRI'S BOOKS ARE AVALIBLE FOR DOWNLOAD ON AMAZON