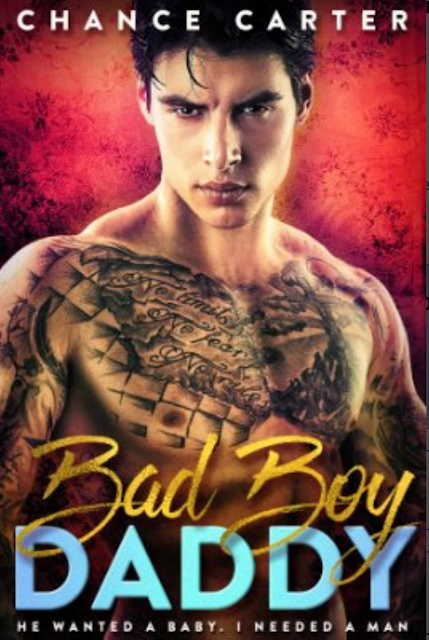 He wanted a baby. I needed a man.

Faith
The first time I saw Jackson, I hated his guts.
He was everything I could never have. Pure, panty-wetting,
manhood. And I was trapped in a loveless relationship with his
worst enemy. I never would have dreamed he craved my womb
so badly he was willing to do anything for it.

Jackson
My father's death taught me a lot of things. Most importantly,
I needed a child. I had to have a son before my enemies caught up
with me. So when Faith came begging for protection, I knew exactly what I wanted. I yearned for her body. Lust raged through me like wildfire. I longed to make her pregnant with my child.
I gave her an offer she couldn't refuse. A life for a life .
My protection, in exchange for everything she had to offer.
I'd die for her, but she would give me a son.

I took her womb. I never suspected she'd take my heart.

This was a brilliant debut book by Chance Carter.
I have never come across a book like this, most books have been told to many times but they all end the same. This book was nothing i have ever read totally brand new in the indie world, the bad boy Jackson wants a son and in walks this girl Faith who needs protection from her Ex.
He is a man who knows what he wants and goes for it, but when he finally gets what he wanted. He leaves like a man possessed, to finish what he promised. Even if it means leaving the girl who has captured his heart.
Faith is a girl who is broken after her relationship with her Ex, she is looking for a way to get away from him for good. On that one night she meets Jackson and her prayers are answered, but for his protection he wants the one thing she never expected. A son.
This book hooked me from the start, Jackson is the lovable bad boy who every girl wants. And Faith is the girl that needs a man to protect.

The only thing I would of Liked to of read would of been when he went off on his mission with one thing on his mind - To kill...

I am really looking forward to seeing whats next in this series and If we get to see more from Jackson and Faith.
Chance is the author to keep your eyes out for,
with more stories like this he will have a huge following.
Congratulations Chance.