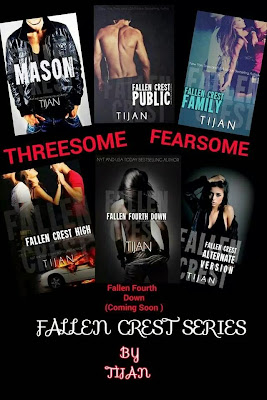 MASON/LOGAN : What Did you think when you first saw Sam?


Logan shrugs. “I didn’t really pay attention, to be honest.”


SAM - WHAT did you think when you first saw MASON & LOGAN?


I thought they were assholes.


MASON - WHY are you so protective over both Sam and Marissa?


“Marissa was a friend and that’s an obvious answer with Sam. I protect people I care about.”

Will you ever introduce them to each other proberly or are you planning on keeping them apart for some reason?


Logan answers, “Uh, we’re under contract by that Tijan person not to say a damn thing, something about spoilers.”

SAM - DO you really hate your mother and how do you feel about the way she has treated you?

She frowns. “Yes. No. She’s my mother. That answer is very complicated.”

LOGAN - Do you have feelings that you shouldn’t have for sam as she is your brothers girl?


He shakes his head. “I’m going with the Tijan contract/no spoiler thing again.”


MASON - Are you at all jelous of Logan and Sams relationship,  does it worry you he could take her away from  you when you leave for college?

MASON / SAM - How long Do you guys think your parents will disapprove of your relationship, Do you think they will ever accept what you to have?


Mason shrugs. “Good thing I don’t give a damn about that stuff.


Do you think  you will last if they never approve of you both dating?


He frowns. “I’m going with my first answer. Good thing I don’t give a damn. It’s no one’s business but our own.”


SAM - How does it feel to have not only the Hottest player but the guy every girl wants?


She grins at Mason. “I wasn’t aware you were a player.”


She laughs, her cheeks warming. “I do now and it’s amazing, but also sucks because I have to deal with so many girls hating me.” She sighs. “Kris is dating Logan and no one hates her. What’s it about me?”

LOGAN / MASON - What do you think of sams parents?

They answer at the same time, “They suck.” Mason grins. “David doesn’t, or he’s trying,
but they both sucked from the beginning.”


SAM - WHAT do you think of LOGAN  and MASONS parents?


“Well, since Helen hates me I’m not a big fan of hers and as for James,” she shrugs.
“I feel sorry for him. He loves my mother.”

MASON - Are you jelous of Adam and SAMS relationship?


“No. They have no relationship.”

SAM - HOW did you feel when your mother told you David wasn't your real father?


And what do you think of your real father?


She shrugs. “I don’t know how to answer that. Stay tuned?”

LOGAN - NOW that Mason has Sam, Do you think that you will find the right girl for you?


He smirks. “The real question should be IF I want to find the right girl.”


Is it possible she could be right under your nose and you don't  even realize it?


He nods. “Still pleading the fifth.”

MASON/SAM / LOGAN - What is up next for you guys?


Logan grins, “Scoring.” His grin turns into a smile.


Thank you guys, you have been really awsome today.